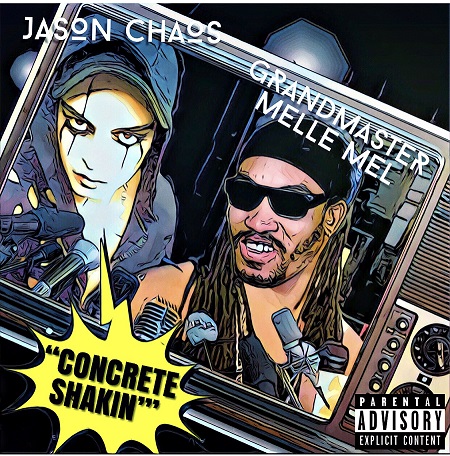 “Concrete Shakin” marks a historic event: this is the first time hip-hop and gothic rock will have joined forces on a major platform.

Melle Mel first met Jason at a New Years 2020 party where the two bonded over their preference for glam in fashion, as well as having worked with the same film director Eric Rivas. Both trailblazers, wanting to shake up the monotony they felt in the hip-hop industry, set out to the studio to invent a track that would better represent the market and connected a theme, rather than a facade, to their music and their personas.

“Concrete Shakin” pushes listeners to act now, not to wait for the world to go into havoc. “Chaos going on in the world should not be an excuse to get things done,” says Jason. “Don’t wait for the concrete to start Shakin, man.”

The song will be remixed and featured in the soundtrack of “Duke of York,” a film about the pandemic premiering in late 2020 directed by Eric Rivas, director of “Vamp Bikers” with Apache Ramos and renowned NY journalist Michael Musto.

Grandmaster Melle Mel is the American hip-hop legend who pioneered the way for hip-hop in the 1980s. Melle Mel has been a source of inspiration for many of today’s hip-hop stars, with songs like “Freedom” and “The Birthday Party” (both produced on Sugar Hill Records), “The Message,” and his anti-apartheid “Sun City.” The songwriter and former lead vocalist of Grandmaster Flash and the Furious Five has won two Grammy Awards and was inducted into the Rock and Roll Hall of Fame in 2007. Melle Mel is widely known as an innovative force of music, even fusing hip-hop with wrestling in a collaboration with the Urban Wrestling Federation.

Once a member of New York’s Club Kids at the Limelight and the former lead singer of internationally acclaimed underground band He11cell, Jason is the creator of music’s newest sensational genre: Gothic Rap. Jason started as an exclusive tattoo artist for black metal bands such as Dimmu Borgir, Deathstar, and Dissection, where his skill in guitar, international touring, and songwriting was noticed by industry professionals. Jason’s additional releases include “Ghost 4uck ft. Jazmine Yvone” and “Chaos.” Follow Jason on Instagram @thejasonchaos.